With Christmas less than a week away and New Year’s to follow closely after, there’s never been a better time to look back on 2019, and what a year it has been for Japanese whisky! In a year that marked a century since the first license to distil whisky was granted in Japan, we’ve enjoyed a wonderful array of new releases, celebrated many milestones and watched ‘old classics’ dominate on the world stage yet again.

With that in mind, we’re featuring a new release for 2019 and an old favourite side by side each day from now until Christmas.

Today, we’ll be taking a look at the first single cask whisky in the popular 963 range and the Suntory Hakushu 12 Year Old. (There might even be a cheeky discount code at the bottom of the page…). 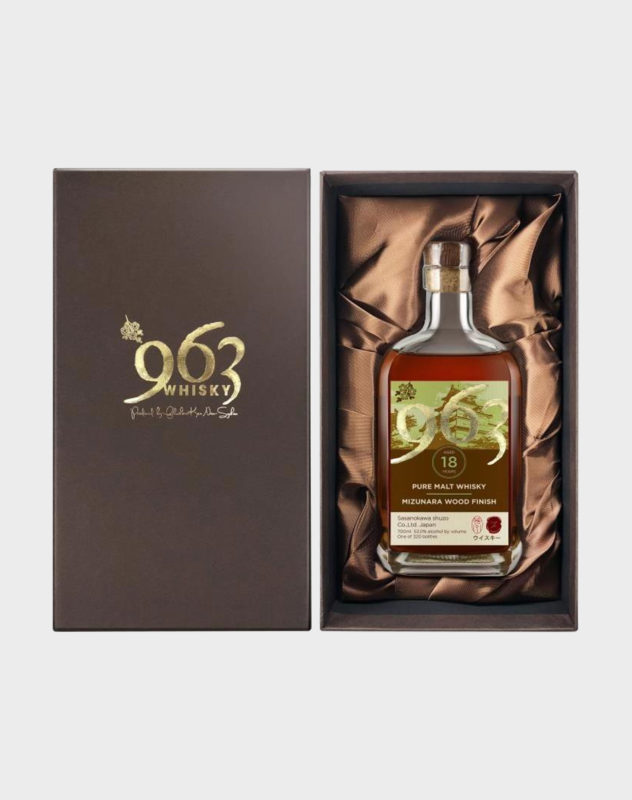 The Sasanokawa Shuzo Company have been producing Sake and Shochu since 1765 and ventured into whisky production in 1946. Since then they have released a number of notable expressions and tellingly, they have outlasted a great number of distilleries that were forced to close down during several tough moments in Japanese whisky history.

While they have released many a fine whisky, the best of these are probably those in the Yamazakura 963 range. Under this brand, they’ve released a number of blends and pure malts that have received acclaim from fans and critics, really bringing them into the spotlight.

This year marked a milestone for the Yamazakura 963 Range, they would release their first single cask whisky. With that comes a lot of responsibility and pressure for those working at Sasanokawa Shuzo, but they proved that they are more than up to the task.

The cask they selected was simply excellent, an 18 Year Old pure malt that was given a healthy finishing period in Mizunara oak.

The age of the whisky is immediately apparent, the nose is smooth and buttery, with hints of toffee, gentle sea salt and the slightest nip of wasabi. The palate is equally as impressive, with chocolate orange, roasted chestnuts and a subtle aroma of incense.

Only 320 bottles of this gorgeous whisky were released and given the fact it’s the first single cask expression in the 963 range, it’s that bit extra-special.

Those behind this whisky, and indeed the entire range, have over 60 years of experience making whisky and it’s beginning to show with truly outstanding expressions like this one. We’re getting very excited for what they have in store for us in 2020.

Suntory’s Hakushu distillery is one that most people are familiar with. Known as “The Forrest Distillery”, it is the highest operational distillery in Japan, with an altitude of more than 2000 feet above sea level.

Established in 1973, the distillery is surrounded by stunning lush forests, waterfalls, streams and wildlife, while the air is as fresh as it comes. These surroundings lend themselves to the Hakushu spirit, which is light, floral, refreshing and crisp.

The Hakushu 12 Year Old is the entry level age-statement expression in the distillery’s range. It brings an elegance and refinement that you don’t find in many whiskies and has received deserved recognition on the world stage, while delighting millions of taste buds around the globe.

Sweet apples, almonds and herbal tones are apparent on the nose before juicy pears, butter cookies and freshly cut grass on the palate. The finish is crisp and lingering, with just a hint of peat smoke creeping through.

This fine single malt has picked up a number of awards for its efforts, winning Gold at the International Spirits Challenge 2012 and winning Double Gold at the San Francisco World Spirits Competition in 2011, 2012 and 2016.

Unfortunately, the story of the Hakushu 12 doesn’t end well. Thanks to the on-going whisky shortage, Suntory took the decision to remove the bottle from certain markets and massively limit the amount that would be available in the next few years.

Fortunately, we do still have some stocks remaining at dekanta, so if you’re looking to get your hands on a bottle it is possible for now.

That’s all for today but be sure to come back tomorrow when we’re taking a look at The Kigai and the Hibiki 17 Year Old.

BONUS: Order the Yamazakura 963 18 Year Old Single Cask and/or the Hakushu 12 Year Old today and save 10% with promo code: “YAMAHAKU”. Just add one or both to your cart and enter the code at the checkout.