Suntory was founded in 1899 by Shinjiro Torii, who opened his store, “Torii Shoten”, in Osaka to sell a range of imported wines. In 1921 the store became the Kotobukiya Company and two years later they made their first venture into the whisky world when they built Japan’s first whisky distillery - the now legendary Yamazaki.

Torii built Yamazaki with his good friend, and the “father of Japanese whisky”, Masataka Taketsuru, who had recently returned from his travels to Scotland where he had picked up many of the practices and techniques needed to distill quality whisky.

Taketsuru had initially wanted to build the distillery on the northern island of Hokkaido, due to the weather conditions being similar to that found in Scotland, but Torii was concerned about the cost of transporting the required materials to the island. A location just outside Osaka was chosen instead.

Taketsuru worked as manager of the Yamazaki distillery for around 10 years before setting out to create his own company, Nikka, and finally building the distillery he wanted on Hokkaido - Yoichi.

The Kotobukiya Company struggled to continue producing whisky throughout World War 2 and it wasn’t until 1946 that they managed to start distilling a significant amount of spirit once more. They re-released their first creation “Torys Whisky” and it was lapped up by thousands around the country as the locals’ taste for the spirit grew. 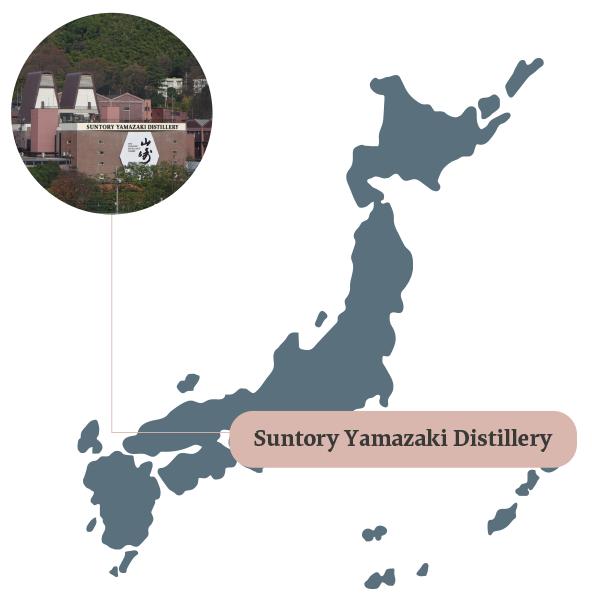 After experiencing years of moderate growth and success, the Kotobukiya Company changed its name in 1963, and Suntory Whisky as we know it today was born.

In 1972 they built the Chita grain distillery in the Aichi Prefecture, and the whisky made here would be used predominantly in blends.

The following year, and 50 years since the founding of the Yamazaki distillery, Suntory’s second master blender, Keizo Saji, decided it was time to expand further and build a second malt distillery.

He wanted the whisky produced there to be different in character than that being made at Yamazaki and so he sent one of his most trusted employees, Tameo Onishi (Yamazaki Distillery Manager at the time), on a journey around Japan with the goal of finding the most pristine water source in the country.

After a long journey that took him to all corners of Japan, he stumbled upon Hakushu. Even though he had come across many incredible sites and water sources on his travels, he was shocked at what he found here, stating “I’m surprised Japan has this type of water”. This journey would lead to Onishi being named “The Water Hunter” and soon after, Hakushu was born.

The new distillery would allow Suntory to produce a range of different whiskies, both single malts and blends, thanks to the contrasting characters of the spirit being produced at Yamazaki, Chita and Hakushu.

From here on, the company went from strength to strength as Japanese whisky grew in popularity around the country.

When Japanese whisky finally exploded onto the international market in the early 2000s, Suntory Whisky was well placed to take full advantage and their incredible creations became hugely sought after around the globe.

The Japanese whisky boom allowed Suntory to expand even further and today they have vested interests in not only Japanese whisky, but also Scotch and bourbon. They have gone on to produce some of the most astounding whiskies ever created, picking up a huge number of awards along the way.

They are without a doubt one of the biggest drinks companies in the world today - a true drinks giant and whisky legend.

Hibiki 21 Year Old was, yet again, selected as the best blended whisky in the world at the World Whisky Awards 2017. This comes as no surprise to us at dekantā, as the Hibiki has been awarded every year at the WWA since 2009, and is, in our view, a work of pure genius. The judges described it as being “Elegant, sweet and complex. This whisky is full of dried fruit, orange peel, strawberry jam, and baked apple from start to finish. Smooth, subtle and fairly short.” We agree and we are sure you will, too!

Hibiki 21 Year Old was, yet again, selected as the best blended Japanese Whisky at the World Whisky Awards 2020. This comes as no surprise to us at dekantā, as the Hibiki has been awarded every year at the WWA since 2009, and is, in our view, a work of pure genius. The judges once described it as being “Elegant, sweet and complex. This whisky is full of dried fruit, orange peel, strawberry jam, and baked apple from start to finish. Smooth, subtle and fairly short.” We agree and we are sure you will, too!

Be among the first people to experience Japanese Gin. The Suntory Roku Gin is the first gin released by Japan’s leading whisky producer. This gin was initially distributed exclusively in Japan. For the rest of the world, we’re here to help! Order your bottle today to experience this historic gin.

What’s it like to stand atop Mount Fuji? We’re guessing if you had to bottle that feeling this is what it would taste like! This beautiful bottle is a stand out, if you appreciate Japanese Whisky this is one you’ll want to own! If you ever decide to open the bottle you’ll be greeted with one of our all-time favorite whiskies, the Hibiki 21. Beautiful presentation combined with fantastic whisky, this one is a win-win!

Be one of the first to own this remarkable bottle that is part of the Suntory Essence collection. Limited quantities available, these will likely sell out fast.