Japan’s “first artisanal gin” was launched last year, by the wonderful Kyoto distillery. Yet, it was recently, in 2017, that Japanese gin really went global, with two gins by Japanese whisky giants, Nikka and Suntory.

The Suntory Roku and Nikka Coffey gin, both featuring Japanese botanical-heavy recipes, launched first in Japan, and more recently reached Western shores. Both have been with us here at dekantā since summer, when they dropped in Japan.

Popularity surrounding Japanese gin is growing fast, both domestically and globally. Following Japanese whisky’s success, the world expects nothing but quality from the country’s producers. Read up on Japanese gin with our recent interview in PUNCH magazine. 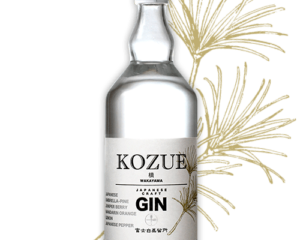 By Nakano BC (biochemical) comes the Kozue gin. Released on November 1st, the Kozue is an exciting new release in the Japanese gin category. While the company has produced other liquors before, including sake and shochu, this is their first venture in gin.

The expression features several botanicals local to Wakayama Prefecture, where it is made, including mandarin peel, lemon peel, and sansho. The juniper used is imported from Europe.

What really sets Kozue apart, however, is the addition of Japanese umbrella pine (koyamaki). The company proudly states that the Kozue is the world’s first gin made with koyamaki.

The nose brings abundant pine and pepper spice, while the palate rolls out with citrus, pine needles, and cinnamon. For a 47% ABV release, it’s extremely smooth and drinkable.

Only 100 bottles were released, with more to follow. We’ll have it up for sale soon, so keep your eyes peeled! 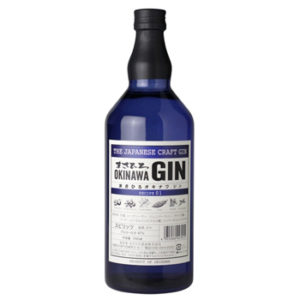 This release was only announced yesterday, on November 10th.

Made by the Masahiro distillery, which has been making Awamori for over a century, the Masahiro Okinawa gin is the very first to come out of Okinawa.

Gin is very new to Okinawa, where the historical spirit of Awamori is produced. With an exotic recipe and unique production in pot still as opposed to columns, popularity for this small-batch gin is expected to soar.

We’ll have the bottle up very soon, just in time for Christmas shopping.

With excitement building around Japanese gin, the Gin-Posium event by the Japan Gin Association couldn’t be coming at a better time.

Over five hours, on December 3rd at the Hotel East 21 in Tokyo, Japanese gin will be under the spotlight. Starting with seminars and special guests, and then moving on to tastings and food pairings, the event is expected to educate and inform guests on the growth and future of Japanese craft gin.

The Okayama gin takes a different route, as an expression aged in oak, made by the famous Miyashita sake brewing company.

Innovation is a huge part of the growing industry. As competition rises, it will only become harder for each gin to break apart from the rest, with unique production practices and ingredients.The Kyoto distillery is taking a great approach to innovation, evident in the amazing ex-Karuizawa cask-aged Ki Noh Bi, released in September.

In the land of Japan, gin is rising as brightly as the sun.

As a half-Greek Scotsman, George discovered his passion for whisky while working for Whisk-e, Japan's largest whisky importer, in Tokyo. George is now an integral part of the team at dekanta, acting as head writer. He also writes for Forbes.com, Playboy, Financial Times, Food & Wine, Liquor.com, Wine Enthusiast, Saveur, and Distiller.com, specializing in world whisky and spirits. When he isn't sampling and writing about great spirits, he's drinking coffee, eating, and travelling the world. Follow his whisky adventures on Instagram: @whiskyislander